Watching the telly and thinking about your holidays

That’s entertainment.  So goes the song. And it goes. Round and round my head at the moment.  Although why Jam lyrics should want to camp out in my head all day every day for the past week I don’t really know.  Perhaps it’s because of the constant warnings I’ve been waking up to every morning spreading the news about the possible health implications to those fools who persist in eating well done TOAST! Funny how the brain works,  desperately reaching out to make connections while it still can.   Suppose I should be grateful and listen attentively to its subliminal messages while my mind is still in a reasonable state to transmit them. And so, as I sit in front of the telly more evenings than I care to admit, while working out where to go in the summer when ‘Silent Witness’  (or whatever else it is I’m watching), hits a dull patch, I realise that  it’s true. I have arrived at that point, the point where every angry young person who has ever listened to the words of Paul Weller (The Jam and not The Style Council) vows they’ll never go.

Sitting. Watching. Thinking. Sometimes eating. Maybe drinking. As opposed to doing. Oh but of course I hear you cry out to the screen in ridicule,  all verbs imply that you’re doing something. But really, there’s doing and doing.

And all I’m doing is watching the telly and thinking about my holidays.

And while the tune is going over and over in my head a poem that I studied for ‘O’ level has also popped coincidentally into the space (because, at the moment, there’s lots of room).

Lollocks by Robert Graves (although when I first remembered it I could have sworn it was by Louis MacNeice).

I fear those accursed lollocks have come to haunt me, multiplying and weighing me down by making me eat the chocolates left over from Christmas, and the rich fruit cake which no one really likes (and even if they did they’re not around to eat it), not to mention the peppermint creams I made for the first time.

‘Women can see them —
O those naughty wives
Who sit by the fireside
Munching bread and honey,
Watching them in mischief
From corners of their eyes,
Slily allowing them to lick
Honey-sticky fingers.’

Though not quite a picture of me, this black month of January, when my children have all gone, leaving me sad and lonely, I’ve come perilously close to the lazy grazer loafing on her comfortable Loaf sofa nibbling on Lindt chocolates while warming her cold feet (no doubt due to poor circulation as a result of lack of exercise) by the  woodburning stove.  This explaining the sum total of this month’s entertainment – the telly and the holidays. 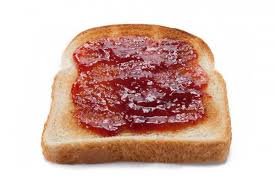 Jam on toast (from bad to worse…)

And so, with my bleakest January ever almost  behind me what am I to do?  Perhaps it’s time to look at the Robert Graves poem again for an answer to that:

Are hard broom and soft broom,

To well comb the hair,

To well brush the shoes,

And to pay every debt

As it falls due.’

So, it’s time to get dressed up  and go out.  Sound advice Mr Graves. As for the jam, it’s probably a good idea to stop eating it and start listening to it again. Just to keep me on my toes.

It’s strange how the mind works.  Although I’d better get booking that holiday! And keep off the toast.

Frock Friday’s Maxim of the Week

‘If we had no faults we should not take so much pleasure in noting those of others.’
(La Rochefoucauld)

Frock Friday’s Quotation of the Week

about reading & writing – what else is there?