Tankards, earthenware drinking cups and glasses clink, chink and clunk together as wassailers bid each other good health.

Wassailing. It hadn’t registered on my ‘excuses to eat and drink to excess’ before this year. And so when Martina suggested that we have a wassailing evening I didn’t really know what to expect.

Wassailing is a very ancient tradition involving drinking to good health and to a good apple crop for the coming year.  The word ‘wassail’ itself comes from the Anglo-Saxon ‘waes hael’,  meaning ‘good health’ though it refers also to the drink traditionally drunk  while wassailing. Wassailing is usually done on or around 12th Night, and the wassail itself was originally a drink made of mulled ale, roasted apples, curdled cream, eggs, cloves,  ginger, nutmeg and sugar  (sometimes known as ‘Lamb’s Wool’ due to its white and  frothy appearance caused by the pulp of the apple and the cream ).

However, Martina thought that we could have a wassail feast too. And  I was to bring a starter. A starter?

I didn’t know much about wassailing but from what I did know it seemed fairly obvious to me that  starters weren’t big in wassailing circles.  And so it proved. I spent hours pouring over recipe books and getting lost on the Internet.

But then I found it. The perfect wassailing menu on the site of ‘The Ethicurean’, a…but before I attempt to describe the place perhaps you’ll get a better idea of what ‘the Ethicurean’ is in their own words –

‘This is the idea of having a connection with the native land, its history and the community who grow food locally upon it. Our family team seek to discover harmonious pairings between the ingredients that surround the walled garden.’

‘The Ethicurean restaurant is set in the enchanting Barley Wood Walled Garden, a perfectly restored Victorian kitchen garden, bursting with fertile life. But far from your usual garden cafe fare, gardener Mark Cox sends his produce to the restaurant in the delightfully scuffed former glasshouse to be made by the team into some of the most delicious, innovative, vegetable-focused cuisine in the land.’

And so it was here, perhaps unsurprisingly, that I found a wassailing menu. Once discovered I managed to find wassailing menus from previous years and eventually opted for Caerphilly and Cider Rabbit (posh cheese on toast), although I wouldn’t do this ever again, not least because it was too filling. In fact, the entire evening seemed to be a laying down of fat to cope with the harsh winter months ahead.  A veritable festival of fat, sugar and stodge… I couldn’t get to sleep that night because I’d eaten so much… Although, thankfully, due to a bad cider experience in my youth, I’d refrained from drinking too much.

Most recipes are taken from the Ethicurean Cookbook – 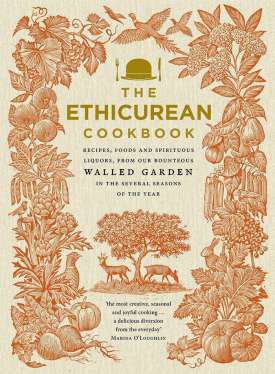 If you don’t fancy cooking yourself you can eat at ‘the Ethicurean’  restaurant. Click here to check out a menu –

‘The Ethicurean’ is located at –

and here’s one by Blur ‘The Wassailing Song’

And for more on wassailing  go to  http://www.historic-uk.com/CultureUK/Wassailing/.    Time to bless some fruit-growing trees…